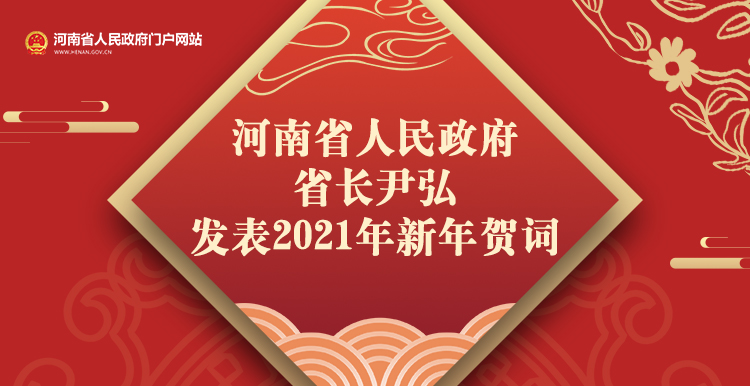 Governor of the People's Government of Henan Province

Time stops for no one, and once again we have come to the point of departure where we ring out the old and ring in the new. Through the web portal of the People's Government of Henan Province, I would like to extend sincere wishes to fellow Henan people, people from all walks of life, friends at home and abroad who understand and support Henan's development.

The past 2020 has been truly remarkable and unforgettable. Confronted with the grave and complex situation brought about by coronavirus and momentous changes unseen in the past century, under the strong leadership of the CPC Central Committee with Comrade Xi Jinping at the core, up and down the province, we have braved winds and waves, seized opportunities in times of crisis, fought against the epidemic head on, advanced development and ensured people's well-being. Thanks to all those efforts, the economy has been continuously recovering for the better. The targets and tasks set by the 13th Five-Year Plan have been largely completed, and decisive achievements have been made in completing the building of a moderately prosperous society in all respects. Great strides have been made in the magnificent cause of making a more splendid Henan, laying a solid foundation for modernizing socialist Henan in an all-round way.

Over the past year, we have stood in solidarity to fight the COVID-19 and tide over difficulties, building up"Henan's defense" for coronavirus response. The coronavirus broke out all of a sudden. Departments at all levels, party members and officials have all along put the people and their lives above everything else. Undaunted by the severe challenges posed by the fact that Henan has a population of over 100 million, returnee rural migrant workers of over 10 million and ongoing massive flow of people and goods, we have strictly implemented the"four early" measures, adopted the"big data+grid" model for society-wide, cross-sectoral and inter-departmental response efforts and treated patients in a science-based way, curbing the spread of the virus within a month. In response to the changing circumstances of the epidemic at home and abroad, we have taken solid steps to prepare ourselves for the long-term fight against the virus. By December 30, no local case has been newly added for more than 277 consecutive days, representing significant strategic achievement in epidemic prevention and control.

Over the past year, we have fought hard against poverty, winning the decisive victory. We've developed industries, created jobs, provided financial services, channeled consumer spending to poor areas and relocated people from inhospitable areas to lift more out of poverty and stepped up follow-up support. By the end of this year, the remaining 353,000 poor people have gotten out of poverty and 52 poor villages have shaken it off. Eight years of unremitting efforts have paid off with 7.186 million poor people being lifted out of poverty. The task of poverty alleviation in the new era is expected to be fulfilled as scheduled.

Over the past year, we have strengthened scientific and technological underpinning, making a name in innovation. We put innovation front and center of the overall development, rolled out 20 opinions on promoting high quality development of Zhengzhou-Luoyang-Xinxiang National Innovation Demonstration Zone and launched the National Innovation Center of Bio-Breeding. The national supercomputing center in Zhengzhou has passed official appraisal. With 172 national innovation platforms, 6,300 high-tech enterprises and over 10,000 small and medium-sized scientific and technological start-ups, innovation-driven development has become consensus and awareness among the public.

Over the past year, we have pushed forward industrial transformation led by new economy and ensured high-quality development. We have expanded investment in new infrastructure, new urbanization initiatives and major projects, made modernization plans for 10 emerging industrial chains such as the late-model displaying facility and intelligent terminal devices, and set up and put into use as many as 32,000 5G base stations. We took the lead in China to build a Huawei Kunpeng Eco-Innovation Center. The Kunpeng computing industry led by the local brand"Huanghe" has begun to take shape, and major projects such as the global base of H3C smart computing terminal and the China Great Wall Technology Group (Zhengzhou) innovation base are under construction.

We have strengthened the application of new technologies to transform and upgrade traditional industries and advantageous industries. We have newly cultivated and built 45 provincial-level smart factories, and up to 60,000 enterprises have been enlisted on the cloud platform. New products such as 10 million-ton smart mills and low-speed wind power equipment have been put on the market. Some newly developed aluminum alloy and copper alloy products have filled the gaps in the domestic market, and breakthroughs have been made in key technologies in the nylon industrial chain. New growth drivers became stronger. Great efforts have been made to promote high-quality agricultural development and the grain output in Henan province has reached 68.25 billion kilograms, setting a new record and contributing more"Henan grain" to the"Chinese rice bowl" in the year stricken by the epidemic.

The year of 2020 witnessed the significant improvement of people's livelihood as we have spared no efforts in very difficult circumstances to promote people's well-being. We have taken it as the priority to safeguard the well-being of the people and the proportion of people's livelihood expenditure has been increased to 76.2% despite the financial constraints. Eleven key livelihood issues are expected to be successfully accomplished, with more than 1.2 million new urban jobs created and the living standards of the disadvantaged groups and retirees being continuously enhanced.

We consider it as the most inclusive well-being of the people's livelihood to improve the environment. We endeavor to protect our blue skies, clear waters, and clean lands; the goal of clear days for the whole year has been successfully achieved; the three-year mission of pollution prevention and control has been fully completed, and the 370 kilometers of comprehensive ecological corridor along the Yellow River has begun to take shape. As a result, Henan people feel more satisfied, happier and more secure.

Such is the result of hard work of all as every step doesn't come easy. Come rain or shine, Henan people have forged ahead over the past year, showing sincere and profound feelings for their families and motherland as well as their indomitable fighting spirit. Among them, there are"heroes in harm's way" with great love -- doctors and nurses who heroically throw themselves into the epidemic-stricken areas,"unsung heroes" working on the front-line represented by care workers, street cleaners，security guards of Yuanfang Group who wouldn't shrink back in the face of risks, the ordinary"working people" who stick to their posts and make their contributions, and large number of party members and officials who practice their purposes with action and take care of the people's concerns with their original aspirations. They are the most adorable and brilliant Henan people, backbone for Henan's modernization endeavor.

The year 2021 marks the very beginning of the 14th Five-Year Plan and will usher in the centenary of the Communist Party of China. We will fully implement the guiding principle of the Fifth Plenary Session of the 19th CPC Central Committee and the Central Economic Work Conference, conscientiously carry out the guiding principle of the 12th Plenary Session of the 10th CPC Provincial Committee and the Economic Work Conference of the Provincial Party Committee, base ourselves on the new stage of development and implement the new development concept, kick off the planning for a new development pattern with a good start.

We will set sails for the innovation-driven development, strengthen and give full play to the leading role of Zhengzhou-Luoyang-Xinxiang National Innovation Demonstration Zone, further improve the flexible talent introduction mechanism. We will introduce an open competition mechanism to select the best candidates to lead key projects, give scientific workers and researchers greater autonomy, make it easier for the agglomeration of high-end innovation resources, promote the deep integration of innovation and industrial chain, making Henan the pacesetter of innovation in central and western China.

We will strive to optimize the layout of regional economic development, strengthen the leading role of the two metropolitan areas of Zhengzhou and Luoyang, enhance the engine function of Zhengzhou as a national central city, level up Luoyang as the sub-central city in the Central China City Cluster, and thrive county-level economy. We are determined to create a more powerful system to support the high-quality development in Henan.

We will ensure the agriculture in Henan province remain a shining example, speed up the establishment of the national R&D platforms such as the pool of resources of wheat germplasm, etc. We will initiate and implement the building of the national core area of grain production in the new period, resolutely shoulder the political responsibility of grain security, and continue to strengthen the base of agricultural products with distinctive features. We will actively develop green organic agricultural products, vigorously promote the intensive processing of agricultural products. We will also consolidate and expand the poverty relief achievements and help make the former poverty-stricken rural areas more prosperous.

We will comprehensively push forward and implement the strategy of environmental protection and high-quality development in the Yellow River basin, and strengthen ecological protection and control, carry out major projects for the protection and restoration of landscape, forest, lake, grass and sand, undertake in-depth actions to speed up land greening drive, and continue to fight the battle against pollution so as to realize the goal of building the province into a powerful one with ideal ecology of blue sky, green land and clear water.

We will promote in-depth reform and higher standard opening up to the next phase, press ahead with reforms to streamline administration and delegate power, improve regulation, and upgrade services, promote digital transformation of the government, conduct further evaluation of business environment, deliver better services for market entities and the people. We will strive to speed up the building of inland highlands of opening and create a comfortable environment for the talents and merchants at home and abroad to realize their dreams here in Henan province.

We will make Henan a happy and beautiful home for the people, continue to do a good job in improving people's well-being such as employment, education, medical care, social security, elderly care and childcare. Great efforts will be made to ensure safety in production and market supervision. We will not slacken our efforts to implement epidemic prevention and control, protect the lives and health of the people, and ensure that Henan is a safe and nice place to enjoy their life!

In the coming year, we will take Xi Jinping Thought on Socialism with Chinese Characteristics for a New Era as the guide, forge ahead with indomitable spirit, work faster to make a modern socialist Henan and strive to compose magnificent chapters to make Henan more glorious in the new era!